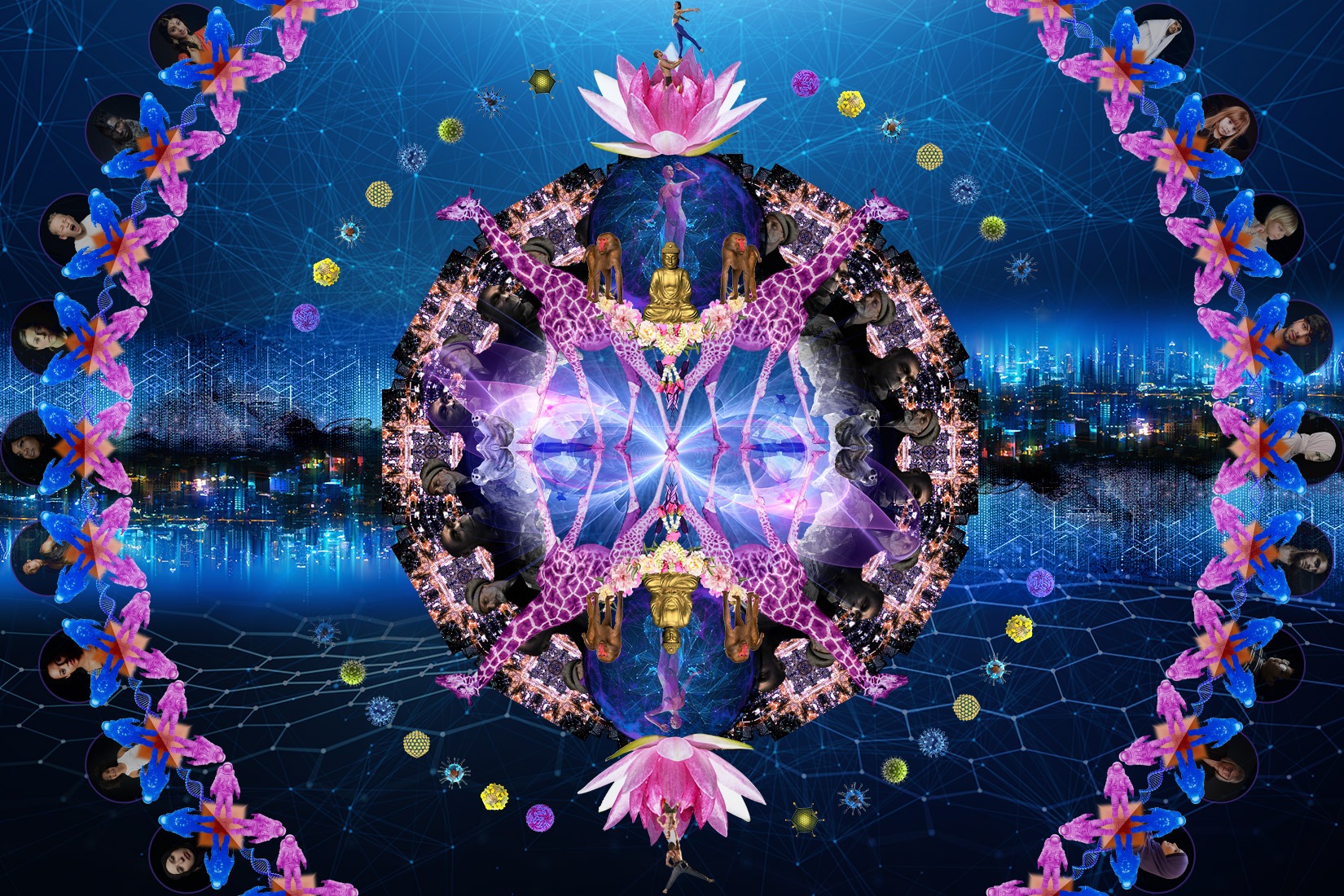 As JH Creator Lee Hemingway feathers the edges of an image of an astronaut that represents humanity “furthering our exploration,” he cheerfully explicates the stunning photo collage he created in response to the theme of our new collection, “Limitless.”

I had already settled on man’s interaction with technology, the past, and future,

he says. But he also gathered inspiration from eight other JH Collective members, asking for images, stories, sound bytes – anything that inspired them around limitlessness.

Lee explores and develops his concepts before even opening Photoshop by using a technique he calls “spidering.”

Spiders are programs that periodically crawl the Web and create an index (that’s how sites like “Wayback Machine” exist). Similarly, Lee searches for words related to a central theme, assembling a set of key terms.

“For this project I have: cityscape, computer science, human viruses, light textures, man’s evolution, nature, and sacred geometry,” he says.

From those words, he searched for representative images and constructed a library of assets. Before he even started on “Limitless,” he had accumulated a library of over a hundred images; now, it’s doubled.

In this way, he sets a firm foundation that prevents him from getting lost in the weeds. “By the time I get to designing I have so many resources and such a good foundation that I’m not starting from scratch. I’m being more thoughtful and focused.”

A central “altar,” the vertical axis of the piece, includes the symbol for infinity in the center and is capped by lotuses. “It’s the most spiritual part,” Lee says. Giraffes also appear here: “Giraffes are never a sign of any spiritual anything but who doesn’t love a pink giraffe?” Lee asks hypothetically.

A woman in a womb-like orb carries DNA with her – a very natural image, and yet, she’s computer-generated and futuristic-looking. The piece is actually full of other shapes that look simultaneously organic and synthetic – I point out what I think looks like an intricate textile and Lee says, rightly, that is also looks like a computer chip.

A ring of microbes rings the altar – bacteria and viruses. “Viruses are a constant for all species and have been here before us and will be here after us,” Lee says. “They’re the most adaptable thing on the planet. I wanted to nod to them because they’ve been more effective at killing us than we have at war – they are better at mass destruction than we are.”

“Limitless” also features smoky cityscapes sit atop streams of data: the Internet of Things creating a feedback loop that sometimes helps and sometimes harms us.

If you look closely, you might find a few “easter eggs” in the piece – small images that only appear once. Lee draws a comparison to a tradition in Persian rug-making: the placement intentional flaws to an otherwise perfectly regular creation. Whereas in the case of the textile, it’s assumed that only Allah should create something perfect, Lee placed these to break the repetition in an otherwise highly symmetrical creation.

Lee gets to work on the next piece of the collage – a ring of astronauts, light and dark, “astronauts taking people to their next place.”